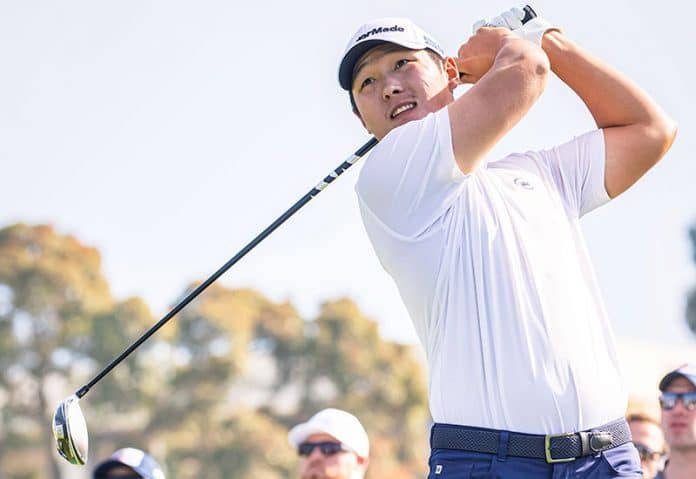 Danny Lee has been forced to retire from the Farmers Insurance Open in San Diego with a back injury.

Lee managed to complete his first round, hitting 6 of 14 fairways and 11 of 18 greens in regulation, finishing at 7 over par 70 before retiring, 13 shots off the lead held by Sebastian Cappelen and Keegan Bradley.

Cappelen, a rookie from Denmark, was doing his own thing away from the crowd, narrowly dodging the fog that rolled in late in the afternoon, and he was doing it well.

“I never really put me in a terrible spot where I couldn’t make par,” he said.

A bogey-free opening round on the North Course set up 2011 US PGA Championship winner Keegan Bradley, who made an eagle at the par-five fifth.

Coming off his record-tying 82nd victory in his last PGA TOUR start three months ago in Japan, Tiger Woods handled the par 5s on the easier North Course at Torrey Pines and limited mistakes for a 3-under 69.

Rory McIlroy, who played in the group in front of Woods, was among those at 67. Jon Rahm, playing alongside Woods, was in the large group at 68.

Jordan Spieth, meanwhile, made a solid if unspectacular start with an opening-round 70 that included five birdies.

Fellow Kiwi Tim Wilkinson played the North Course and struggled on the front nine with two bogies on 1 and 6 alongside a birdie at 5, then headed for the clubhouse 2 birdies and a bogey to finish even with the card, six shots behind the leaders.

Weekend Ahead: Lee in California, Fox in Dubai and Ko in Florida

Weekend Ahead: Danny Lee in Bermuda