Following on from Neville Idour’s story “A Junior Golf Revolution” in the November 2020 edition he has felt the current situation in Dunedin is well also worth relating. The catalyst was the launching of the Wakatipu Junior Golf Club in 2014 and if proof was needed that their template works, Dunedin’s success provides that. Dunedin was the first to follow with the Virtual Club concept in 2018 and their March update revealed facts to warm the heart of any golf enthusiast.

The club has 359 active members made up of 278 juniors aged between 4 and 19 and 81 parent members. More adults are being introduced to golf by this program and since January 1st this year there have been 67 new members. Dunedin Coordinator Jen Bowman said the club is experiencing growth like never before and so they are developing new programs to support the players.

“So there are little ones going out playing their team Ambrose. Then the older children who are working towards getting handicaps or already have a handicap are playing a nine-hole tournament weekly as well. We have around 15 playing that each week and sometimes parents join in so it becomes Sunday morning family time as well.

“We are also developing a girls program with support from NZ Golf which will be implemented in term two (school term) and will involve different types of programs. On April 17th there is a long drive competition and also a pairs event for an adult and child combination at Taieri Club. Could be a parent and child. So it is about trying to find opportunities for a broad spectrum of players.”

The club provides between 20-25 programs each school term, plus after school coaching by qualified coaches such as Michael Minty and they also run various family Ambrose days.

“We have under 10’s who can play with Mum or Dad. They want to so it is a good opportunity. However on Sunday Ambrose days parents don’t play but are encouraged to be there as support.

“Then our Senior players who could be aged anywhere from 10 to 18 and are still working on their handicaps and going to different tournaments. Finally, we have our Elite players who are supported by Otago Golf and NZ Golf. We have 17 players with a handicap under 10 and several of these players work with NZ Golf Development teams.”

Bowman said she is trying to find tournament-based programs to get them all more engaged.

“Maybe something like a fortnightly autumn slam. The girls only program with ideas from NZ Golf aimed at eight to 14 is structured to give them more confidence.

“We are getting new players every week. During Easter weekend we took a team of 18 to play in the Queenstown Junior Open followed the next day by the Arrowtown Junior Open. For 10 of them, it was their first tournaments. It is about getting them introduced to some competition without them feeling embarrassed. Some of them are only getting into doing their nine holes.

“What was really nice was our local Roslyn Physio sponsored team shirts for them as it is so hard to find corporate sponsors. So they could proudly look great as a smartly attired team.”

Bowman is contracted to do 15 hours a week but she probably does more like 40 or more. Her dedication and love for what she does are evident. She certainly fulfils the need for these virtual Junior clubs that Wakatipu JGC coordinator Simon Boland stressed. Boland said,” it is essential to have an enthusiastic and competent coordinator prepared to put in the effort required if a club like this is to succeed.”

“I’m really passionate to get the kids involved,” Bowman continued, “Our program is still very much a developing one. While a lot has been done for our younger juniors, not so much for the intermediate and senior ones. Grant Boyd the previous coordinator set up some wonderful team golf programs. My children and I started under Boyd, coming along to Sunday golf. So I am building on the great work he
did.”

Bowman’s background is in Marketing and after a move from Auckland to Dunedin two years ago she actually does play golf, “I do play golf…. badly,” she laughed.

“I like to do a lot of walking, sometimes changing fairways as I play ensuring I get to play a lot of golf. My husband Michael is a scratch golfer and helps out with the junior coaching every week.”

The club has set goals for 2021 some of which we have already touched on, in addition, they are aiming at having 500 members by years end. They want to see extra after school training with coaches and also encourage all to reach handicap status. Finally to support players to compete in tournaments both locally and nationally. 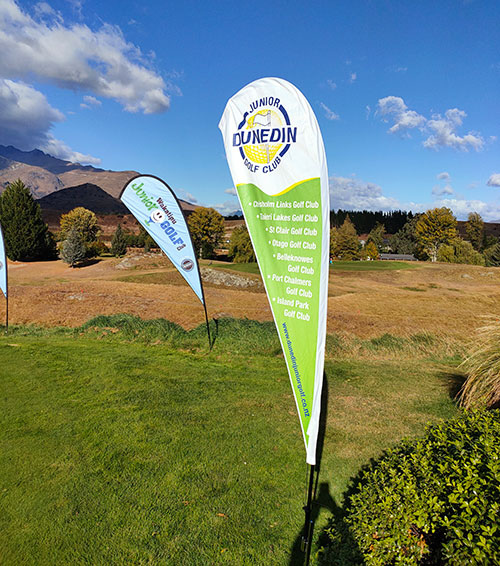 **Dunedin Junior Golf took out the top 3 spots Queenstown open in the U19 Boys with Parker Aluesi, Jacob Murray and Callum White! They also had an outstanding round by one of our players Albie Reed who took out the Under 13 stableford with a record 48 points in Queenstown. Dunedin Junior Golf Club also performed well at the Arrowtown Open with top 2 to Parker Aluesi and Jacob Murray for the U19 and a fantastic win to Cade Patrick in the U13 boys with 36 stableford points!**

Junior Hole in One Tsunami