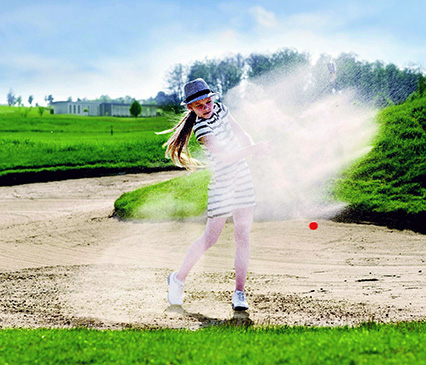 Image – something generic of people playing golf, preferably kids (1st preference) or one of Tiger that we have already used this year

The Masters 2019 – an event that culminated in what will surely become one of sport’s most romanticised moments – Tiger winning again after 11 years of injury and scandal and numerous back surgeries – the magnitude of the human element in the story transcends sport.

I was delighted to have been invited to the Golf Writers Association of America 2019 awards dinner the evening before the tournament started.  Tiger was awarded the Ben Hogan award given annually by the GWAA to an individual who has continued to be active in golf despite a physical handicap or serious illness.  In his acceptance speech he spoke humbly of the anguish of needing a pain relieving injection just to attend the Champions Dinner at Augusta National in 2017.  He talked of telling Jack Nicklaus at that dinner in 2017 that he was “done” and that he wouldn’t be able to play golf again.  He said he couldn’t event putt in the backyard with his son Charlie.

Spinal fusion followed and he used his love of golf and his kids and a burning desire to be able to fully participate in a life that included both as his motivation to a remarkable recovery.

For Tiger to have delivered so eloquently and humbly his story of recovery and to then go on to win the event in the following days was surreal.

It got me thinking about the power of sport and Nelson Mandela’s words:

This ethos is increasingly being embraced by the powerhouses of world golf.

Augusta National once the epitome of sexist conservatism, is now actively involved in promoting equality for women both in terms of inviting women members and this year for the first time hosting the final round of Augusta National Women’s Amateur Championship on the Saturday before the Masters.

They actively use the brand in “Grow the Game” initiatives.  The Drive Chip and Putt Championship is a free junior golf development competition aimed at growing the game by focusing on the three fundamental skills employed in golf.  By tapping the creative and competitive spirit of girls and boys aged 7-15 the Championship provides aspiring junior golfers an opportunity to ultimately qualify to earn a place in the National Finals which is conducted at Augusta National the Sunday before the Masters and which is televised live on the Golf Channel.

Since 2010 the Asia Pacific Golf Confederation, the Masters Tournament and the R&A have created the Asia-Pacific Amateur Championship to promote the game of golf in this region – New Zealand having had the privilege of hosting the 2017 event at Royal Wellington.  The success of this initiative has encouraged the Masters Tournament and R&A to replicate the model in the form of the Latin America Amateur Championship.

The R&A along with these tournaments uses its brand and funding derived from the Open Championship in an increasingly broad range of grow the game initiatives.  Their goal is to encourage all golfers to play the game regardless of any disability that they may have.  The R&A provides investment to many organisations supporting disabled golf and now administers along with the USGA a global ranking for golfers with disabilities helping to grow and promote inclusivity within the sport.

A recent innovative initiative that the R&A has invested in is a programme targeting people – particularly golfers – living with dementia and memory loss.  Through its group of companies and Alzheimer Scotland “Golf Memory Groups” come together monthly in a social format at the Home of Golf.

Through reminiscence and activity they are reconnecting members with their passion for golf through spending meaningful time with other golfers and enjoying friendly banter.  The programme is measurably making a difference by helping people change their attitudes by demonstrating that you can live well with dementia or memory loss.

We are fortunate to have been the recipient of R&A investment in New Zealand for developing “grow the game” initiatives enabling NZ Golf to design and implement programmes aimed at increasing the reach and relevance of our great game.  And to play our part in honouring the spirit and intent of the likes of Nelson Mandela and the Ben Hogan award to use our sport to inspire and motivate.

Michael Smith is the Chairman of NZ Golf Inc.