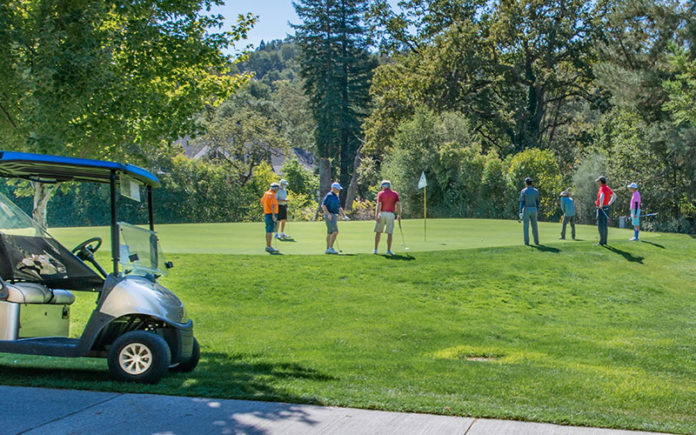 I wonder how many golfers in this country, and for that matter, many others, are aware there is another rule book.

For years many have felt that the rules of golf are far too complicated and voluminous.

The recent changes were welcomed and have certainly made the game much more pleasant and quicker to play in this writer’s opinion. However, this is still dependant on golfers being on the same page.

It only takes one pedantic person to ruin it.

Which brings me to the extra rule book which is the “R & A Pace of Play Manual.” Yes, slow play, which can be a blight on the game was deemed so important that the R & A produced this 72-page epistle. It contains six sections with 48 sub-rules or guidelines.

It covers the purpose of the manual, Management Practices, the Golf Course, Player Behaviour, Conclusion and Appendices which include a “Self Assessed Pace of Play Control System” which suggests about four control points on the course where players check they are up with the designated times to reach each point.

Penalties are suggested. It actually takes two pages to spell it out.

The manual was compiled after an extensive international survey of more than 56,000 golfers in 122 countries. 60% said they would enjoy golf more if it took less time.

Hardly earth-shattering, yet true. It is hard to dispute the R & A introduction. “Golfers views on pace of play in our club game have been markedly varied for a long time with emotive perspectives. Moving from discussion to a practical way forward is what this manual is all about.”

While much of what it contains is painfully obvious and common sense it would be a valuable tool for all golf clubs as it covers anything you could think of. The sections on Management, the Course and Behaviour are particularly explicit and valuable.

Now with golf experiencing a surge here in New Zealand pace of play could become more of an issue. Many clubs are having fully booked days as new members add to the increase in play by existing members.

So it is important for clubs not to compress tee times to accommodate more players as this creates bottlenecks and slow play.

Setting the course up too difficult with long rough, will penalise club players and lead to time wasted on course. Excessive green speeds also do not help.

As for players, simply play ready golf. Get to the ball ready to play if it is safe. There is nothing worse than seeing four players walking in unison waiting for each player to go through a routine before playing a shot. I just love being able to get to the green and if first there with time, to putt with the flag in.

Ready golf on the green really speeds up the game without making the player feel he has to rush. All these points and a multitude of others are covered in the manual.

Let the manual have the last say.

”The manual reviews the three aspects (Management, Course and Behaviour) that contribute to the problem and the upside is it enables all of us to to be part of the solution.”