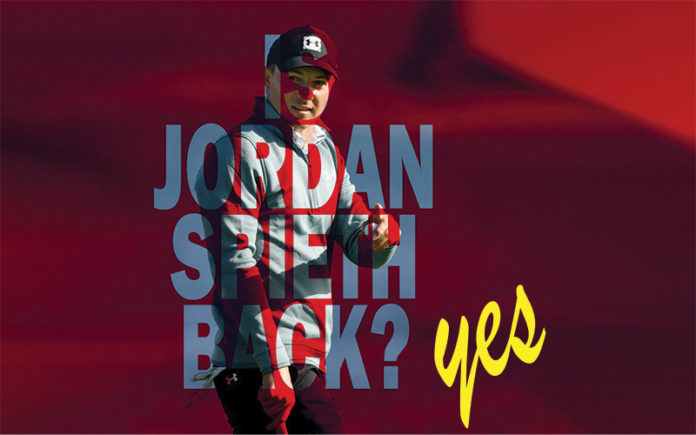 When Jordan Spieth tapped in for par to win the Open Championship for his third major and 11th victory in just five years on the PGA Tour he never imagined he would go 1,351 days before he felt that way again.

He went 82 events on Tour without winning. Once the No. 1 player, he was headed out of the top 100 in the world. And now he’s back.

Spieth ended a mystifying slump Sunday by giving himself birdie chances and making most of them, closing with a 6-under 66 to hold off Charley Hoffman for a two-shot victory in the Valero Texas Open.

“There’s peaks and valleys in this sport, but I never expected to go this long,” Spieth said.

“Back then, in between wins, maybe I took things more for granted than I should have. It’s very difficult to win out here and I’ll certainly enjoy this one as much as I have any other.”

The only surprise was that he figured he would be more emotional. He was too busy holding off a spirited run by Hoffman, who went from a three-shot deficit with six holes to play to one shot behind. Spieth all but sealed it with a wedge to a back pin to 5 feet for birdie.

“This is a monumental win for me,” Spieth said. “It’s been a long road. There were a lot of times that I didn’t know I would be here.”

Now he heads to Augusta National as one of the favourites at the Masters Tournament. Even going so long without winning, the 12th win of his career allowed him to join some elite company. In the past 40 years, only Tiger Woods, Phil Mickelson, Rory McIlroy and Justin Thomas has won at least 12 times before turning 28.

In the March edition of NZ Golf Magazine our contributor Mike McAllister hypothesized that Spieth was getting close to getting back to his best, he was right. Let see why he thought today was inevitable.

The buzz started after a spectacular Saturday in early February at the Waste Management Phoenix Open. A career-best 10 birdies leading to a 61, tying his career-low score on the PGA TOUR. A share of the third-round lead. A spot in the final group on Sunday – his first in nearly 2-1/2 years.

The chatter continued the following week when he held the solo lead after the second and third rounds at the AT&T Pebble Beach Pro-Am, evidence by his supporters that the previous week had not been a fluke. Twice, he holed out from more than 100 yards – just the second player in PGA Tour history to pull off that feat.

Another positive sign through the first two rounds of The Genesis Invitational – in contention and inside the top 12 of the leaderboard for a 10th consecutive week. Consistency and confidence were on full display.

So, is Jordan Spieth back?

It depends on your definition and perspective, of course. If being back requires returning to the winner’s circle, then no, Spieth is not yet all the way back. He remains in search of his first PGA Tour win since the 2017 Open Championship, a drought currently at 79 worldwide starts. For a player who will eventually enter the World Golf Hall of Fame, winning remains the gold standard.

But if being back means simply leaving the abyss of an extended dark period that was both perplexing and frustrating – besides being unexpected, of course – then yes, perhaps Spieth is back. With a T4 at TPC Scottsdale and a T3 at Pebble Beach, Spieth recorded consecutive top-5 finishes for the first time since 2018.

More importantly, he’s showing progress and feeling confident that he’s on the proper path. With the PGA Tour schedule entering its big stretch of championships and the first major of the year at The Masters, it no longer appears to be a question of whether Spieth will make noise, but just how much he’ll make each week.

“As long as I’m trusting what I’m doing, I know I’m moving in the right direction,” Spieth said. “That’s just the head space that I’ve wanted to get into – and for a while now.”

Awhile, indeed. When Spieth won at Royal Birkdale in 2017 in a drama-packed final round, it was his third win of the year and 14th of his Tour career. He added a couple of runner-up finishes during the FedExCup Playoffs and seemed poised for a spectacular 2017-18 season.

But after a Sunday 64 at the 2018 Masters that nearly fueled an improbable rally from nine shots down – he eventually finished tied for third with Patrick Reed – Spieth failed to build on the momentum. In truth, he went the opposite way. He produced just one top-10 finish in his final 13 starts of the season and did not qualify for the TOUR Championship. It was his first winless season on Tour.

The 2018-19 season was equally unrewarding, with just one top-5 finish in 23 starts. Again, no Tour Championship. And the 2019-20 season was even less fulfilling; he opened the season with a T8 at The CJ Cup @Nine Bridges, and could never match that in his ensuing 16 starts. He made the FedExCup Playoffs but was bounced after two rounds. And he was not selected for the 2019 Presidents Cup, the first time as a pro that he did not represent the U.S. Team.

“There was a number of things that I got off on mechanically,” Spieth explained. “It was very frustrating because I felt just as competitive and felt the same, still the same me. I just would take the club back and feel lost.”

For a player who wears his emotions on his sleeve, he definitely looked lost. Golf fans suffered right along with him. It was difficult to see him struggle.

“First time in my life where I’ve had a significant dip in success,” Spieth said. “It had kind of been a nice uptick every single year. So just kind of learning how to deal with that and doing it – and having to do it in such a public way was very difficult, can sometimes present even more challenges.

“But at the same time, the idea is to get to the bottom of it, turn it around, make progress every day and recognize that’s the past. I can use it as having scar tissue and use it to my advantage going forward.”

People wanted to help, but Spieth was determined to figure it out on his own, along with the help of swing coach Cameron McCormick. Everybody else was tuned out – with the exception of Butch Harmon, who offered some feedback at Spieth’s request.

“He asked if I could come over and take a look at what he and Cam were working on,” Harmon explained during an interview with PGA Tour Radio. “I agreed with most of the stuff they were working on. I thought I was going to have to change his clubface at the top of the swing – you know how open that gets because he has a very weak left-hand grip – but they had worked beautifully on that. … I didn’t think he was turning enough … if you don’t wind stuff up, you can’t unwind it.”

Said Spieth: “I was probably too stubborn and waited too long to probably reach out to people that I definitely could have for just help, whether it’s certain areas of the game or just getting through … down years or something like that.”

Spieth kept working but his first start this season was a missed cut at the Farmers Insurance Open. He dropped to 92nd in the world, his worst ranking since his first Tour win at the 2013 John Deere Classic moved him to 59th as a 19-year-old.

From that perspective, it was his low point. Even Spieth admitted he “was not in a great head space.”

And yet, a week later, he shot 61 and found himself in the heat of battle. Golf is funny like that. Something can just click after years of frustration. Spieth might have the best explanation – if you hit “tens of thousands of golf balls the wrong way, it takes about that many to get stuff back.”

“Did some really phenomenal work from Sunday through Wednesday … that was probably the best period of a few days of work that I’ve put in in a long time,” Spieth said about the days leading up to Waste Management. “It just got me believing in what I was doing and progressing forward.”

The road back has taken longer than expected for the former World No. 1, and he’s not all the way there yet. Winning remains the ultimate objective and not just one win, but multiple wins – and on the biggest stages.

For now, though, Spieth is feeling confident about the future. That might be the most important thing when wondering if he’s back.

“It gets me really excited about playing golf – and for me, that makes me happy,” he said. “It’s nice to be going to bed wanting to do what you love to do and you get to go do it. Can’t take that for granted and I’m glad to be on this side of it right now.”

As Jordan Spieth seeks rebound in 2020, a reflection on his legendary collegiate career