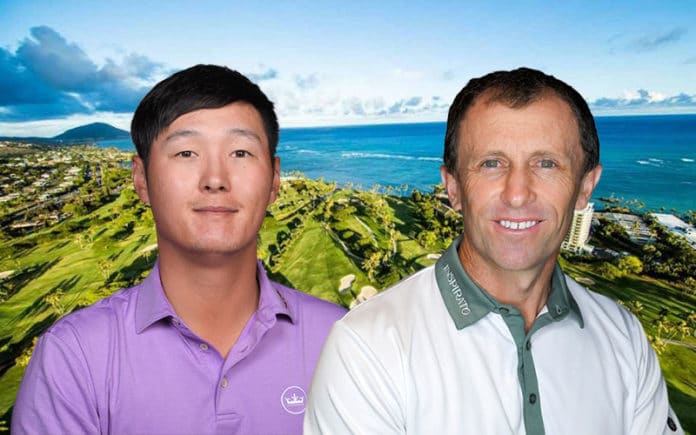 Kiwis Danny Lee and Tim Wilkinson are starting their golfing year this weekend when they tee off on Friday at the Sony Open in Hawaii.

In the second tournament of the PGA Tour this year, Lee ranked 140th in the world at the end of 2020, will try and shrug off his inconsistencies of last year and start afresh.

Lee has been spending a lot more time in the weights room during the holiday period, working out at Intelligent Strength in Koreatown in Los Angeles where the gains in his body shape have been substantial.

This weekend we will see if those gains in the gym have an effect on the course.

Wilkinson, now in his 21st year on tour, finished last year missing the cut in the last four events he played.

His only top 20 finish was in the Puerto Rico Open so the Hawaiian event looms as a great kick start into the year before the Korn Ferry Tour commences in mid-February.

Last year’s Sony Open winner Australian Cam Smith is back to try and be the fifth player to go back to back in the tournament.

Kiwi Caddy Sam Pinfold was working with Smith at last year’s victory and spoke to NZ Golf Magazine last year about how he secured the victory.

“The conditions were warm and breezy, but the course was wet and long, so tougher than normal,” Pinfold explained.

“I can’t say I thought we would win this tournament, even though Cam had been playing well without his usual Australian summer break.”

“He started with a bogey and then a triple bogey so he was 4-over after 2-holes which isn’t a great prelude to winning the tournament! Cam’s success can be attributed to the work he had done leading into the previous month’s Presidents Cup event at Royal Melbourne.”

In yesterday’s media conference Smith talked about the victory.

“It seems like so long ago now, really,” Smith said.

“I mean it was just a great week. I come directly from Australia. Didn’t have much time off because of the Presidents Cup and those events down there in Australia and was coming off some pretty good form and felt good about my game. Didn’t get off to the best start but kind of stuck in there.

“The weather was a bit dicey last year, so it was one of those weeks where I think it could go either way for some people, and just managed to hang in there and yeah, Sunday afternoon, had a really good chance of winning and took advantage of it.”

Cameron Smith will tee off at the Waialae Country Club in Honolulu, Hawaii at 6.50 am NZDT on Friday, Danny Lee tees off at 7.40 am NZDT and Tim Wilkinson tees off at 12.10 pm NZDT.

Ko Storms Into Contention in Florida, Lee and Fox Granted Exemptions for The Open