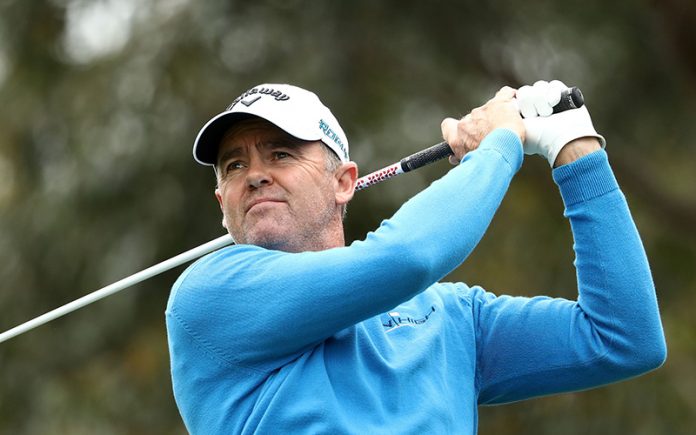 Brown sits at 8-under for the tournament after a second round of 2-under 69 to lead by one over Michael Hendry.

After teeing off early on Friday morning, Brown struggled on his opening nine and made the turn at 1-over par. However, he heated up on the back nine and made birdies on the 10th, 12th, and 18th holes to sign for 2-under and take the clubhouse lead.

Brown said it was a good day at the office.

“It was a bit hard to get going this morning, I was a little stiff and sore which is the nature of my body at the moment. It was a little cold as well, but I managed to get moving as the round went on,” Brown said after the round.

Brown said that it’s great to have another Jennian Homes Charles Tour event on the calendar and is looking forward to the challenge of adding his name to a brand new trophy.

“It’s been a long time since I’ve played in the New Zealand Stroke Play but it feels pretty much the same as all the other Jennian Homes Charles Tour events out here. It’s great to play with some of the top amateurs around the country, especially out here, it’s a great concept.

“It’s been a long time since I’ve had my name on any national championship and it’d be a great honour to get my name on that new trophy.”

Hendry was tied at the top for the majority of the afternoon after he opened with a birdie at the first to get his day off to a solid start and added another at the seventh to get to 2-under for the day and be tied with Brown.

Hendry added another birdie at the 11th to start his back nine but made an uncharacteristic bogey at the 12th to drop back in a tie for the lead. A birdie at the 17th meant he had his nose in front of Brown playing his final hole of the day. However, another uncharacteristic blemish on last which resulted in a double-bogey meant he fell out of the lead an one behind.

Hendry said it was a good day on the links for the most part.

“Generally, it was really good out there. I missed a couple of tee shots; one down the 12th which pretty much took birdie out of the equation and the same thing happened down the 18th where I hit it in the fairway bunker against the lip and was struggling from there,” Hendry said.

“I then made a bad error around the green. I suppose I wasn’t paying attention to the shot that was required; I should have bump and ran one, instead I went for the lofted shot.

“It was an annoying way to finish but all in all it was an okay round of golf out there.”

A shot further back of Toomey is Darae Chung who has taken the lead for the Mellsop Cup which is given to the leading women’s amateur in the field.

Chung fired the round of the day this morning, a five-under 66 which included six birdies and just the one blemish on her final hole of the day.

She said she’s drawing on some hometown energy this week and hopes it pays dividends as she looks to climb her way up the leaderboard.

“It’s quite exciting. It’s always been a goal of mine to win the New Zealand Stroke Play and I’ll try my best to win it in front of some home support. I’ll definitely draw on some of that energy over the weekend,” Chung said.

“It’s much better for me to have the likes of Michael Hendry and Mark Brown in the field who are setting the bar really high and it’s a different standard for me to aim for.”