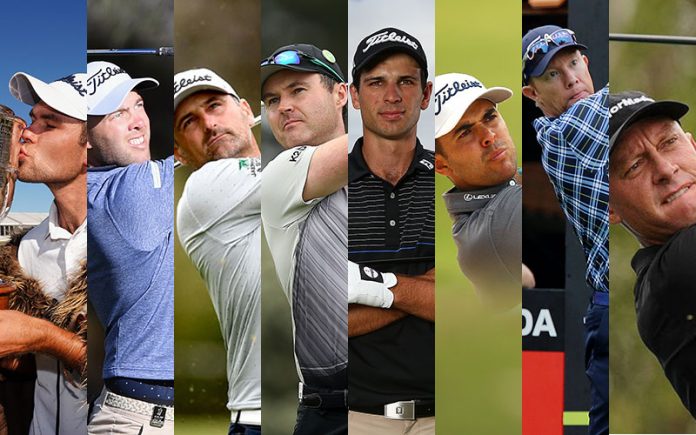 As the New Zealand Open gets set to crown its 101st winner, many of the previous victors are heading back to New Zealand for the chance to re-create their moment in the sun.

NZ Golf Magazine takes a look at some of the most recent champions that are taking the flight to Queenstown to try and go for NZ Open number two.

Having won the WA Open as an amateur, Zach Murray turned professional and celebrated his first win at the 100th NZ Open in 2019.

His amazing performance in winning his first-ever professional title saw Zach lead from start to finish, and qualify for the Asian Tour, which he has played throughout the 2019 season.

Daniel Nisbet is the defending champion having won by two last year but, apart from a win at the Northern Territory PGA Championship in July, his form since has been disappointing.

His brilliant last round last year to catch and pass long-time leader Terry Pilkadaris was particularly impressive and gave him access to the Asian Tour for three years. A win this year would not be the surprise it was twelve months ago but the Queenslander will need to reverse some indifferent performances of late if he is to do so.

Perhaps a return to a venue with such great memories might assist in that regard.

Michael Hendry of New Zealand during day four of the Australian PGA Championships at RACV Royal Pines on the Gold Coast. (Photo by Bradley Kanaris/Getty Images)

Michael Hendry has an outstanding playing record in the Queenstown region having won the NZ PGA Championship on two occasions at the Hills and in 2017 he became the first New Zealander since 2003 to win the New Zealand Open when defeating Ben Campbell and Brad Kennedy in a playoff at Millbrook.

A successful player on the Japan Tour, where he has won one title and cover NZ$2.5 million in his seven years there.

Melbourne golfer, Matthew Griffin, won the New Zealand Open in 2016 when defeating Japan’s Hideto Tanihara in a dramatic final hole battle, Griffin’s birdie to Tanihara’s bogey allowing him to win by one shot.

Now a regular on the Japan Golf Tour, Griffin has also played with success on the Korean and Australasian Tours winning six titles in total but his victory at the New Zealand Open remains his most significant. Griffin turned professional at 25 after representing Australia at the Eisenhower Trophy and gaining a degree in accountancy.

After winning the 2015 New Zealand Open, Jordan stepped forward and took on many courses across Australasia with success. In 2016 he won the Northern Territory PGA followed by a second in the Australian PGA in 2017 and then a win in the 2018 Queensland Open.

Competing on the Challenge Tour in 2019 he didn’t have any real success and again across Australia this year he has struggled, missing the cut three times. He will enjoy coming back to Queenstown to see if he can re-invigorate his form.

Turning Professional in 2012 at the encouragement of his mentor and coach Andre Stolz, Dimi finished 9th at Qualifying School to earn his card for the 2013 PGA Tour of Australasia season. In 2014 Dimi recorded his breakthrough victory winning the New Zealand Open.

In 2015 he most notable finishes were a T6 finish in the Oates Victorian Championship and a T3 finish in the SK Telecom Open. He now competes on the European Tour, alternating between the Challenge Tour (where he won in 2018) and the main Tour.

Papadatos has taken his game to a new level of late, which included a hugely impressive runner-up finish at the 2018 Australian Open. The New South Wales golfer’s victory at The Hills in 2014, which was his first of four to date as a professional, came early in his career. Now into his 7th year in the paid ranks, he is beginning to produce consistently good performances.

Australian Brad Kennedy already has a New Zealand Open title to his name having won at the Clearwater Golf Club in 2011 where he defeated Craig Parry in a playoff. He was also part of a three-way playoff for the NZ Open in 2017 (won by Michael Hendry) and won the NZPGA Championship in 2016, so has enjoyed much success in New Zealand.

Brad plies his trade on the Japan Tour where he has won three titles including one title in 2018. He has career earnings in Japan of over NZ$5 million and is regularly one of the leading foreigners in that country.

With only two professional victories across a 22-year career, Green is now in the twilight of his career but would still love to take another NZ Open title back home to Australia.

Former US PGA Tour Cardholder, recently Green has missed the cut on several occasions with his best result tied for 8th place at the 2019 Queensland PGA.

Tony Richens
Kiwi Steven Alker has had a bogey-free round of 6-under 65 to grab a share of the lead in the Portland Open as part...