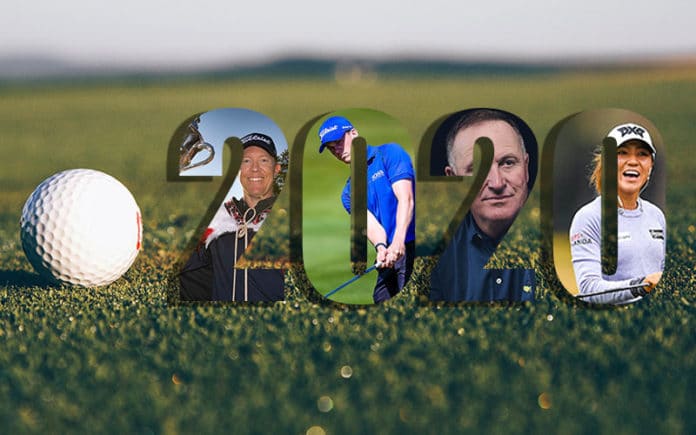 As 2020 comes to an end NZ Golf Magazine looks back at the stories that resonated with you, our readers. What grabbed our attention? Who were the stars? and what should we be looking forward to in the new year.

The first month of the year brought the exciting news that New Zealand’s Amelia Garvey had secured the only Kiwi spot at the second annual Augusta National Women’s Amateur Championship to be held the week before The Masters in Atlanta Georgia.

Unfortunately, history will show that event wouldn’t happen due to Covid-19 cancelling all early events in the year. Garvey would later make the U.S. Open field and perform well for her first outing.

The New Zealand Open led all headlines in February, who would’ve thought it would end up being one of the last golf tournaments in the world for months as Coronavirus started circling the world.

One of our favourite stories was Owen Lloyd who teed off for the first time in the New Zealand Open after securing a special invitation from NZ Golf after winning the New Zealand Māori Championship in January this year.

Owen ended up missing the cut, just as Australia’s Brad Kennedy went on to win his second championship.

Early in the month, our readers were all over our story about the new world handicap system which was about to begin in April but it was soon surpassed by the extraordinary lockdown measures introduced in late March which led to all golf courses being closed.

In April as the lockdown continued, attention first turned to the Lockdown Breakers who were using closed golf clubs for their own recreation or actually breaking the rules and playing golf when they shouldn’t have been.

Secondly, it became apparent golf courses would start to degrade if the lockdown continued so many were involved in bringing about the relaxation of rules so maintenance could be conducted safely.

As lockdown was lifted and golfers once again started to hit the fairways, NZ Golf Magazine released the 2020 Top 40 golf courses list.

As New Zealand exited lockdown, golfers celebrated the opportunity to play one of the country’s leading golf courses free of charge when our number two ranked course Jack’s Point opened up the course for free.

During the month of June, seven emerging talented golfers were added to the New Zealand Golf National Academy for the first time.

Early in the month, figures were released to suggest golf memberships had spiked with a 4.1% increase in golf club memberships across the country following the COVID-19 lockdown.

Also in July, our readers loved the exclusive chat with Sean Foley, former coach for the great Tiger Woods and more recently Justin Rose, he has now joined forces with New Zealand’s Lydia Ko ahead of the LPGA restart.

James Hydes etched his name in the history books, becoming the seventh amateur to win on the Jennian Homes Charles Tour at the Autex Muriwai Open, the first of the tour events to restart since the Covid-19 lockdown.

Standing on the final hole of regulation play he was one behind Ryan Chisnall and tied with Jordan Loof. Chisnall went on to bogey the hole meaning a three-way playoff with Hydes and Loof was needed to decide the tournament.

A par on the first playoff hole was good enough for Hydes to take the title.

Lydia Ko kicked started her LPGA restart with a second-placed tie at the Marathon Classic in Ohio despite a shock last round meltdown.

Ko had a five-shot lead heading onto the 13th hole and then saw her game fall apart, particularly on the last hole, to lose by one shot to World number two Danielle Kang.

As our printed magazine returned since the Covid-19 break, our readers jumped on our cover story on Sir John Key and his golf agenda.

Later in the month, we received the news that the 2021 New Zealand Open would be cancelled due to border restrictions.

In November we read about Waiheke Golf Clubs extraordinary run of consecutive holes-in-one at their club. Ged Gordon and Steve Jones put themselves into folklore with the consecutive aces at the 138m par three 8th.

We also chatted with Cricketing and TV legend Mark Richardson about how much he loves getting out for a game of golf.

The final month of the year saw a run of competitions being held across the country including victory’s by Auckland and Canterbury in the Women’s and Men’s Interprovincial Championships.

James Anstiss shot a 4-under round of 68 to win the Christies Floorings Mount Open by two shots from Daniel Hillier at the final Jennian Homes Charles Tour event for 2020, while Hillier took the overall tour title.

And… Lydia Ko finished off the year with a 13th place in the U.S Open and then tied for 5th in the year-ending CME Group Tour Championship.