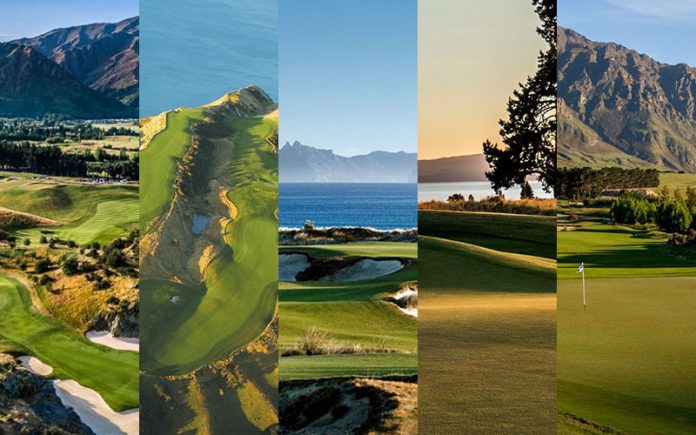 Today we bring you the Top 5 New Zealand golf courses of 2020.

As the country moves back to playing some limited golf after coming out of lockdown, it is the perfect time for golfers around the country to think about their favourite golf courses.

Tara Iti is clearly the best golf course in New Zealand, based on the rankings, and it is also recognised in the international golf ‘world’ as being our best place to golf.

Yes, the golf course is quite private but it is truly something special and if you are ever given the opportunity to play there, then you should jump at it! The course is in an amazing setting, well designed with a layout that blends with the environment.

How the course plays is also unique and memorable. Right from the time you drive through the gates, through to holing your final putt on the 18th green; it is absolutely magical!

Jacks Point jumped from #7 in the last rankings to 2nd place and The Hills was able to leapfrog from 6th place to the number #3 spot. Cape Kidnappers pipped its sister course, Kauri Cliffs, while Kinloch holds its position as the best course in Taupo, just edging out Wairakei.

Queenstown is clearly New Zealand’s best golf destination and every golfer should make it a long weekend to play there; all the 18-hole courses in Queenstown, Cromwell and Wanaka region succeeded in making into the Top 40!

Paraparaumu (#7) and Titirangi (#10) were the top “membership-based” golf courses to play. Both are classics with extensive history in New Zealand golf and were well played by the rankers.

How The Rankings Were Created

The rankings have been compiled from twenty-seven “rankers” submitting their Top 12 courses in the North and South Islands.

The 27 member ranking panel has nearly 1000 years of combined golf experience, with “rankers” from Invercargill through to North Auckland.

They are a diverse mix consisting of professional players, experienced amateur players, golf industry professionals and some club players with extensive playing experience here in New Zealand and internationally.

These golf industry ‘insiders’ have ranked their top twelve golf courses in the North Island and the South Island.

The ranking system is based on seven criteria that cover the key factors that are essential in good golf course design and criteria for what is important to the golfers that play these golf courses.

This includes: Risk/Reward, Playability, Layout, Design, Scenic Values, Conditioning and Ambience. A maximum of five points was awarded per category thus the maximum points any course could receive was a total of 35 points.

The points awarded were totalled up and then divided by the number of rankers; the average was then calculated providing the overall result.

The last New Zealand Top 40 Golf Rankings, coordinated with the NZ Golf Magazine, were compiled in December 2018. With the rankings due to be reviewed later this year (2020) it was brought forward due to the opportunity that the pandemic lockdown provided with golfers sitting at home and having plenty of time to consider their views of their favourite golf courses.

Both Royal Auckland and Riverside (Lochiel) were not considered for ranking due to the courses being under renovation.

Once again, as in previous rankings, there are some “hidden gems” that were mentioned by some rankers, but which didn’t quite make the final Top 40.

This included such courses as Ohope, Waverley, Kaikoura and Roxburgh Golf Clubs which all have some great features that make them fantastic places to stop and play a round.

Golfers were also asked about their favourite 9-hole course and the best place for an after-golf beer. Walton (Waikato) and Tai Tapu (just outside of Christchurch) were popular 9-hole courses while Muriwai, Cape Kidnappers, Royal Wellington and Millbrook were the most popular 19th holes!

It is also important to note that no ranker was able to rank a golf course where personal bias or conflict of interest could be a factor; meaning that they could not rank a course where they were a current member, where they were employed, or with which they had any other direct affiliation.

It is important that this ‘personal connection’ related to the rankings is removed from the judging process, which is also why such a diverse group of the golfers were involved in the rankings.

Geographically, it was also essential that there was fair coverage of rankers from both the North and South Islands, so that all golf courses were able to be judged on their merits. All courses had to be ranked by a minimum of four rankers each, with Paraparaumu being the most popular golf course overall, having been ranked by 25 rankers.

Here is the final batch of golf courses ranked 5th to 1st.

The Cape Kidnappers par 71 golf course measures 7,147 yards (6,569 meters) and will challenge golfers of all skill levels. Completed in 2004, it is built on a ridge-and-valley landscape and with stunning sea views, Cape Kidnappers Golf Course plays high above the ocean atop dramatic cliffs.

With cliff-edge fairways perched 140 metres above sea level and with a surface that remains firm and fast, this course offers holes, unlike anything you find elsewhere in the world. While every hole has a spectacular view of the Bay, some play cautiously alongside deep ravines as others intimidate golfers with deep cliff top bunkers and sheer drops off the very edge of the earth. A world-class championship course that pays homage to the great links courses of the British Isles. Test your skill against challenges designed by the legendary Jack Nicklaus, as you tackle the course and take in stunning views overlooking the sparkling blue waters of Lake Taupo.

Enjoy an outstanding day of golf on one of the country’s best all-season courses. Treat yourself to a luxury golf experience and play undulating fairways and fast greens that ramble over acres of countryside.

Opened in 2007, The Hills Golf Club, New Zealand’s most exclusive club, is set over 101 hectares (250 acres) of former deer farm on the outskirts of Arrowtown in Central Otago. The Mill race winds its way through the property and feeds the ten lakes and various ponds and waterways on the golf course. Trees, both native and exotic, are a feature of the course.

The Hills has hosted several NZ PGA and NZ Open tournaments in its short history and is the current NZ Open host course along with Millbrook Resort. Located in Arrowtown near Queenstown, combined with the stunning surroundings and condition of the course, make it the ideal place to host major tournaments.

With a backdrop of 2300 vertical metres of the Remarkables mountain range and an armchair view of an outstanding lake panorama, Jack’s Point Golf course is one of the most visually spectacular in the world. The 18 hole par 72 championship course offers golfers an exciting challenge with five tee positions to choose from, providing all golfers with an unforgettable golf experience.

Jack’s Point is only 20 minutes from downtown Queenstown, the course is open for all visitors to enjoy 7 days a week in season. While this is a private course, they welcome the opportunity to showcase the course to the golfing fraternity.

Set along a pristine beach 90 minutes drive northeast of Auckland, Tara Iti is a former pine plantation that has been cleared and restored to native dune vegetation outside of the fairways, opening up spectacular vistas of the ocean and the offshore islands. It is the first course in New Zealand to feature fescue turf on fairways and greens to provide true links playing conditions in the southern hemisphere.

Tara Iti is clearly the best golf course in New Zealand, based on the rankings, and it is also recognised in the international golf ‘world’ as being our best place to golf.

Yes, the golf course is quite private but it is truly something special and if you are ever given the opportunity to play there, then you should jump at it! The course is in an amazing setting, well designed with a layout that blends with the environment.

How the course plays is also unique and memorable. Right from the time you drive through the gates, through to holing your final putt on the 18th green; it is absolutely magical!